Tomorrow is Election Day and the schools are closed for the children.  Faculty and staff have a staff development day.  I have a favorite lesson that I have been doing for years on Election Day.  Since we won’t be in school tomorrow, I decided to teach it today.  I never bring politics into a class discussion.  Other than mentioning who is running in a presidential year, or governor – which New Jersey is voting for this year, I try to keep all politics out of the discussion!  Especially in Kindergarten where the children often spout off what they may have heard at home regarding a candidate.

Instead, to teach about voting, we have our own election of sorts in our classroom.  I read them two books.  “The Three Little Pigs” and “The True Story of the Three Little Pigs,” by Jon Scieszka.  I fill the stories with animated drama as I read them.  Some of the children, but not all, are familiar with the fairy tale but only a few of them have heard the second story.  In this version, the big bad wolf, has spent some time in prison for what he has done to the three little pigs and he wants to share his version of the story. He insists that he was suffering from a very bad cold and only wanted to borrow a cup of sugar from his neighbor, the pig.  When he accidentally sneezed, that is when chaos erupted!!

The story is quite funny and I really try to ham it up as I read it to them.  When we have finished both stories, I have them vote for the one they think is telling the truth, Piggy or Wolfy.  I create an election booth and one by one they get to cast their vote.  After everyone has voted, we tally up the votes and see who wins.  This year, Piggy won with an overwhelming number of votes!!  It is fun to watch their reaction as we tally up the votes. We talk about keeping our votes private but you can tell by the cheering who voted for which character.

It is a fun way to introduce the idea of voting and while each year is unpredictable and I never know who the children will choose, I still enjoy seeing their reactions as we add up our votes and decide which version is the “true one.” 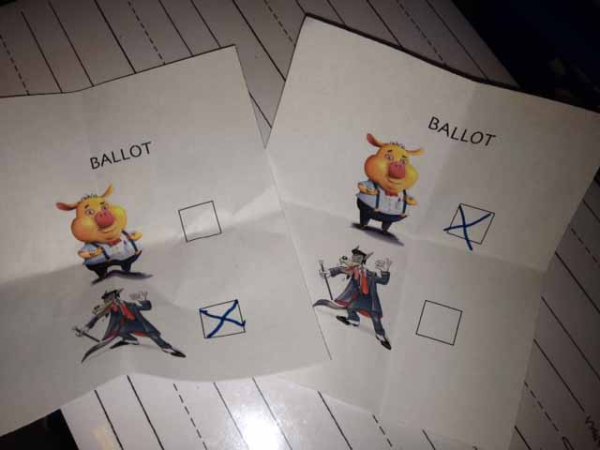