Today would have been my mom’s 69th birthday.  I always write about how I believe in signs and that no matter how silly they seem, I think they mean something.  I have always been that way and maybe it is just because I am looking for something to have meaning behind it.  Signs give me  comfort though, or at least stir up memories so whether it is a sign from above or something else, I like believing in them.

I am sure it is just because it is her birthday, but “the signs” began arriving last night.  I went outside my front door to wait for my dad who was dropping something off.  On my front sidewalk was a partially deflated balloon that said, “HAPPY BIRTHDAY” on it.  I have no idea where it floated from and on any other day, I would have left it there to continue on its journey but instead, I scooped it up and brought it inside thinking it was a sign from mom telling me not to forget her birthday, (as if I ever would!)  I met up with Drew at his baseball game and when it was over, I told him about the balloon.  His eyes lit up and and he said that grandma must have sent it.  I have passed along my superstitions about signs to him…I think that’s a good thing 🙂

The second sign came at camp this morning. Our special needs camp runs along with another town camp and we try to integrate the camps as often as we can.  One of the little girls in the other camp who I didn’t know, came running up to me and asked me if I would hold on to her lanyard that she was creating so that she could play a different game. I told her of course, but asked her what her name was so that I was sure it got back to her.  She looked at me as if I should have known it and said, “Ellie.”  My mom’s name.  Coincidence, of course, but a sign nonetheless.

I picked up Drew from camp and brought that balloon that had floated to our front walk yesterday.  I asked Drew if he wanted to go to the cemetery for a few minutes and visit with grandma.  He did, so we made the quick drive over and brought in that balloon.  We left it there for her.  Drew also left her one of his little rubber ducks.  Then we headed home for him to get ready for his baseball game tonight.  He has the number 13 written on his arms hoping that it will bring him luck tonight.  13 was my mom’s lucky number.

Before heading to Drew’s game, we met at mom’s bench at the park. Dad brought along 13 yellow balloons.  Adding to the coincidences, dad told us all that when he got into the car to come here, Moon River was playing on the radio. It was their wedding song. Six ducks swam down the brook as we were sitting there. A butterfly flew past too.

We all sang happy birthday to her and let the balloons sail up into the sky and watch until we couldn’t see them any longer. 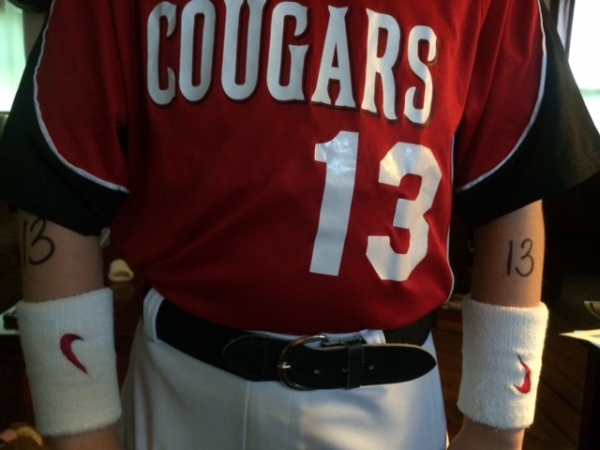