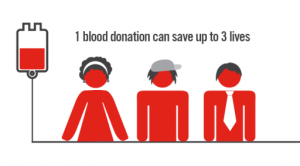 Just a quick update.  My dad is still at the hospital awaiting another blood transfusion.  His numbers dropped again.  I don’t understand any of that stuff –  but I know they should be around a 12 and they are at 6.  This means about as much to me as DJ’s math homework does!!  Again…the reason why I teach Kindergarten and not higher level math!!

He had a test today that revealed two large ulcers that are bleeding.  This could explain the blood loss and hopefully will not be too difficult to treat.  Hoping that is all it is and that medication will be able to help them heal quickly.  If the blood transfusion today is successful and his numbers get to normal levels, they will let him leave tomorrow we hope.  He did start to run a low-grade fever this afternoon though, so they have to get that under control first.  Normally, a fever of 99.9 wouldn’t seem like a big concern, but I guess with the other things going on, they just have to be safe about everything.

I am grateful to blood donors tonight.  I’ve never quite seen how it works and now that he’s on his second bag of blood, it made me realize how important it really is to be a donor.  I have tried once before and was rejected.  This has made me realize that I need to try again.  It seems like such a simple thing to do that could help so many people.

Thanks for all the well wishes for him.  I know he appreciates them.  We all do.