South Orange’s Own “Field of Dreams”

Field of dreams, homerun hit over the railroad tracks, The Village Green September 20, 2014 Leave a comment

Cameron Field was dedicated on May 30, 1914 in front of a crowd of nearly 1000 people!!  The idea was to create a space where boys and girls would have space and equipment to play “to their hearts’ content.”

Back in the 1920’s, South Orange would host games that showcased semi-professional talents against other teams and the Negro League teams like The Newark Eagles, a sort of “pseudo All Star Team.”  During that time, players like Willie Mays, Jackie Robinson, Satchel Paige, Larry Doby and many more played games against the South Orange Villagers.  Baseball legends, Babe Ruth and Lou Gehrig played in a game on Cameron Field.  They helped lead The Villagers to a win that game and together, they hit three home runs, including a legendary one that went OVER the railroad tracks.

I learned so many fun tidbits today watching the game.  No gloves were worn – since they hadn’t been invented yet in 1864.  Pitchers could only throw underhanded, running past first base would result in an out.  A fly ball could be caught on one bounce, resulting in an out.  VERY different than today’s rules which was probably why The Villagers lost 15-2. The Flemington Neshanock team plays 40-45 games a year promoting the history of baseball so they are used to crazy bounces and old-time rules.  The other team wore uniforms that were “throw back” vintage. They had bibs attached to them because the bibs were interchangeable. If a player was traded to a different team, they could still wear the same uniform, with another team’s bib and hat.

Despite the score, it was a fun, well attended game and everyone seemed to have a great time! 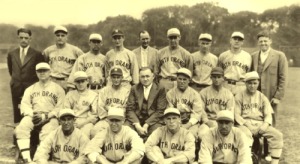 Special thanks to The South Orange Historic Preservation Committee, where I was able to learn a lot of the interesting facts that I have included here today.