Last Day of My Summer..

School starts for teachers tomorrow. Most of us have already been back for weeks, preparing our classrooms for the kiddies to arrive on Thursday. Our two days of professional development begin tomorrow.

It was a busy, fun and productive summer. We celebrated my grandmother’s 100th birthday, (the “real” day is actually this Thursday.) Our cousins from all over the country came to New Jersey and we celebrated for nearly three weeks! I think I wound up seeing more of New Jersey, Pennsylvania and New York with my Western cousins than I would have ever done had they not been here!

We took a “historic” tour of Greenwich Village, visiting the places Grammy grew up, the apartment she and my grandfather lived when they were first married, the church my grandparents were married in and another church where my father and his brothers were baptized.

We went to the beach – so incredibly close, yet for some reason, a place we hadn’t gone in over a year, and to the Poconos with a trip to Bushkill Falls. We got to see another one of our cousins play in a performance of “Rock of Ages”. We went bowling, to a trampoline park, to the zoo and to the pool. We watched a Mandala be constructed in my own home town!

All of this happened in just those three weeks! The rest of the summer, I worked at Camp Maple, where I have worked for the last seven summers, so although we were outside and having fun with our campers….it wasn’t quite “my summer” yet.

On Friday, we take DJ to college. He is one of the last of his friends to leave for school and he is ready to go.  Dave and I….maybe not quite so ready to have him leave, but we are excited for his new adventure.  That might officially end summer for me. A new batch of Kindergarten parents, leaving their babies with me as I leave my “baby” in Massachusetts. It is going to be a week filled with bittersweet tears for all of us!

This week, our community was honored to host five monks for a week long mandala creation project. I had never heard of a mandala, but learned that it is a piece of artwork created by taking millions of grains of sand in various color and laying them out in geometric patterns creating a spiritual piece of artwork . Mandalas have been created for hundreds of years. The meticulous work takes days to create and it is thought that they create positive energy in the universe.

I was a bit skeptical at first but since I was asked to take photos of the opening ceremonies I decided to check it out. Listening to the guttural moans and chants coming out of these monks was mystifying, intriguing and enthralling! I cannot think of enough adjectives to describe it! The monks were from The Drepung Loseling Monastery in India. 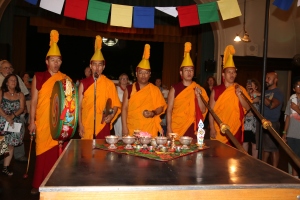 The mandala is said to be a spiritual representation of the universe. Some say it gives energy and balance. The process took all week and I found myself checking into The Woodland, where it was being constructed, nearly every day this week to watch the process. I became truly riveted. Watching their steady hands as they drew the lines and spread the sand captivated me. I spent hours there just watching!

Throughout the week, yoga and meditation classes were held around the mandala. You could truly feel the energy! Believe me, I am a skeptic and truly didn’t think that was possible, but it was. Whether that energy was coming from the mandala itself, or the hundreds of people who came daily to watch the construction, it was there! 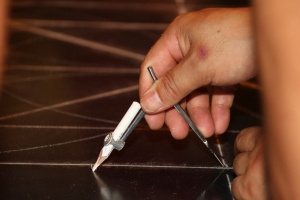 After the opening ceremonies, (which made me feel so spiritual even without understanding the language), they began drawing the lines. It was math, science and art all in one! I took hundreds of photos of their hands and the lines and none of them can do it justice. The chalk as it rose above the lines in a cloud as they laid the lines, the steadiness of their hands – those will have to stay in my memory.

As they began to lay the sand, the richness of the colors and the designs in each quadrant, were becoming more and more vivid. With each day that passed, it became more elaborate. The three dimensional effect was remarkable.

I decided to try some of the meditation classes that were offered. One was a guided mediation which I loved – again, going in skeptical and cynical but leaving inspired and rejuvenated. I also had the good fortune to be invited on an early morning walk through the reservations with the monks. I jumped at the chance and although the walk wasn’t long, watching their faces as they saw the New York City skyline and the faces enthusiasm of the few of us on the walk, I was once again energized.  That spirit was truly in the air and whether it was “all in my head” or not, it gave me such a sense of peacefulness. 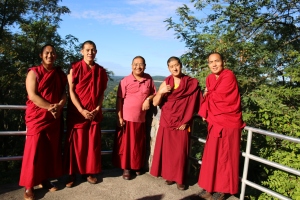 Yesterday, was the final day of the project. All of that hard work and beauty was swept into swirl of color. People were invited to take a small spoonful and the rest was carried in a procession and poured into the local brook. It is said that by doing this, they are releasing the energy of the mandala into the water, dispersing that energy into the universe sending blessings to all. Such a beautiful sentiment. 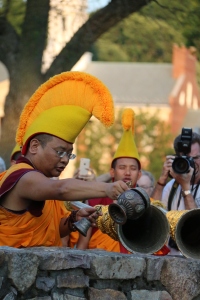 The entire project was filled with love, peace and kindness and for the entire week, it truly brought that to our community. I was so sad to see it end and was feeling a little disappointed after the ceremony. That is why last night, when I got a last minute invitation to have dessert with the monks as they visited the home of a friend, I happily accepted! These friends have beautiful antiques in their home, most of them from Asia and the monks seemed fascinated to see many of them. I didn’t get to speak much to them, again, the language barrier interfered, but I shook each one of their hands, we exchanged our names and smiles. Truly an amazing way to end the week.

The Weather Gods Were Watching!

The rain stopped! About one hour before Grammy’s 100th birthday party, the skies cleared, the sun came out and the weather was beautiful – albeit a bit muggy!  It wasn’t supposed to clear up. In fact, it was supposed to storm again, but the weather gods were watching over Grammy’s and her guests and blessed us with sunshine!  We even had a visit from a yellow butterfly – Drew was convinced it was my mom dropping in to say that she was there!

At 100, there are not a lot of friends around that are your age, but she does have a couple and they showed up. She was so happy to see them! She reminisced with them all night.  We took hundreds of photos and talked about the legacy she has created! The cousins have been together for days! None of them wanting to leave! Eight of them cramming into one bedroom just so they didn’t have to lose a moment of time together.

Today, five of the cousins are flying back home. Some will stay and visit for awhile longer, so there haven’t been tears….yet. We will make the most of their time while they are here. Maybe our Spring Breaks will coincide and this time, we will fly out west to visit with them! That would make Drew so happy!

Less than 25 days until Gram’s ‘real’ birthday! There is no way to top this celebration, but anyone that knows this family knows it will still be something special!

Celebrating in the Rain

This has quite possible been one of nicest summers I can remember in New Jersey. We have had very little rain, and those few times were in the evening. There has been very little humidity – which NJ is famous for! There was only one week where there were more than three days in a row that were over 90 degrees!  The definition of perfect summer weather in my opinion!

We couldn’t have asked for better weather and having a summer job that is mostly outdoors, I couldn’t have been happier! Truthfully, we only needed ONE day to be perfect. Tuesday, August 11th. Today. The day we are celebrating Grammy’s 100th birthday. Outside.

All week long, the weather channels have been predicting rain for today.  We kept hoping that it would change, summer is so unpredictable, but it only seemed to get worse. If you looked at the 7 day forecasts, it displayed cute little suns on everyday EXCEPT Tuesday, where wind, clouds and rain icons replaced that sun! A day with no breaks of sun. “Higher than average gusts of wind expected….”

There is nothing we can do. The tents are already set up in her yard. The relatives have arrived from all over the US  and, although there is some disappointment that the party will have to move indoors, no one really cares so much anymore now that everyone is together.  Our family has been arriving all week long. Despite being thousands of miles away, stretching all the way to Alaska, these kids get along like they’ve been together forever. Having the party stretch out over nearly two weeks has made it so that the big event today isn’t really ruined because of a little rain!

If there isn’t any thunder and lightening, it just might be outside for the kids! The rain isn’t going to stop them! They were together until after 9pm last night running through the tents in the dark playing old games like “Ghost in the Graveyard” not caring that no one could see a thing, so I doubt rain will stop them!

Gram’s actual birthday is not until September 3rd but in order to get everyone here with school and sport schedules, we had to do it a little early. The party is going on, rain or shine. If it has to move indoors, it will. It isn’t very often that someone turns 100 and we cannot wait to celebrate her today!