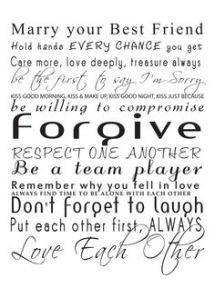 Halloween 1987 – the year Dave asked me if I’d “go out with him.” We had gone to a Halloween party that night with a big group of friends.  I went as a bride, he went as himself, a soccer player he told anyone who asked, but he didn’t dress up in anything soccer other than his Samba sneakers.

I had been given a late curfew that night and was driving a few friends home. They all lived right around the corner from each other so it was a few quick drop offs.  I dropped of Dave and his best friends John and Joe first before dropping off my friends Karen.  Dave lived around the corner and as I drove past his house, he was still standing outside.  He asked me to go with him to the high school football game the next day.  I said yes, and the rest is history 🙂

We have been together for more than half of our lives.  We dated throughout Senior year of high school, went to our prom together, dated while I was in college and he was working.  We married young.  We were both 23 but we’d been together so long by then, we just knew we were ready.  Four years later we had DJ, with Drew arriving five years after that.

Our life together is FAR from perfect, but there are many more good times than bad ones.  We became best friends almost immediately and as a kid, isn’t it everyone’s dream to get to live with your best friend forever? I am so happy that I actually go to do it!