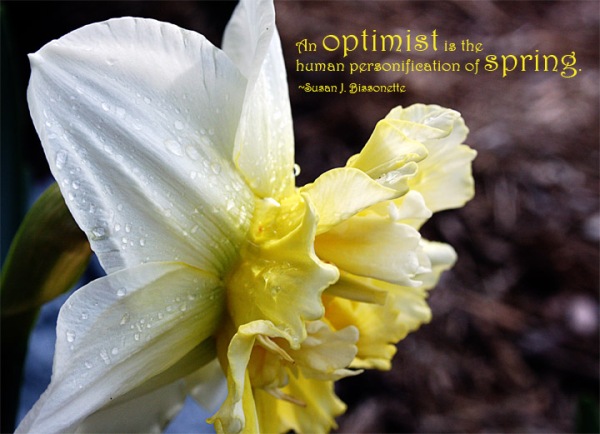 Today the temperature rose above 60 degrees!  After such a miserable winter, you would think it was a holiday the way people were out celebrating the day.  Dave and Drew were finally able to get outside and build the kids’ new basketball net.  Neighbors are gardening, children are riding bikes down the street and dogs are frolicking in the yard!  Yes, frolicking!  Our dog included.  She absolutely hated this winter – maybe even as much as I did!  A few of the storms brought snow deeper than her!

It is the first day that I can look outside my front door and not see any piles of snow.  Windows and doors are open and fresh air is breezing though our home.  This morning, I woke to birds chirping outside of my window.  During Emmy Lou’s morning walk, two skeins of geese flew over our heads honking as they too seemed delighted with the weather.  I saw kids running around in shorts and women wearing flip-flops.  All of us trying to grasp at every bit of this wonderful weather.

I guess we should enjoy it while we can because although I hate to even put it in writing… and my mom would have said to me, “Bite your tongue,” more snow is expected on Monday!

We just got a phone call from a woman looking for my mother-in-law, Nancy.  I don’t know who she was.  We didn’t even answer the phone at first because we did not recognize the number on caller ID.  As she left a message we realized it was someone who was trying to reach her.  Today is Nancy’s birthday and according to this woman, they worked together many years ago.  She said that she found our number and was hoping that she had reached the right family because she wanted to wish her a Happy Birthday.  I spoke with her for a little while and she was so excited that she had tracked her down.  Apparently she hadn’t seen or spoken to her in over ten years.  She said she had no idea why, but for some reason, she never forgot her birthday.  After speaking to her for a little while, I passed along her number so that she could call her and wish her a happy day herself.

I had been sitting here wondering what to write about when the phone rang.  After I hung up, I knew exactly what it was going to be.  I thought it was so nice of this woman.  She had been thinking about my mother-in-law and obviously had to do some research to find us and then make the call in the hopes that we’d be able to get her in touch with Nancy.  She sounded so excited when she realized she had the right person.  I am so glad I could point her in the right direction and now perhaps they can rekindle what seemed like was a really nice friendship even though they haven’t spoken in so long.

I don’t often write about my mother-in-law.  We don’t see her very often.  She doesn’t live far away at all, we just don’t have the same relationship as we do with my family.  We did talk to her today and said we’d meet up soon – after all this bad weather clears up.  She hasn’t been well and has not been going out much this winter so once some Spring like weather shows up, we will take her to lunch to celebrate.   Considering ANOTHER big storm is headed our way tonight, I am not sure when that weather is going to show up but it has to come sometime soon doesn’t it??  Winter cannot last forever…can it?