Today I am letting Drew help me write my blog.

He told me that today at his school there was a Monday morning gathering where the social workers handed out “Pay it Forward” bracelets.  Each student was given two of them.  They were told that one was for them to keep and the other was for them to give away AFTER they did a random act of kindness for another person.  The person they give it to has to do a RAK for another person and they will pass the bracelet on to that person.  The cycle should keep on going.

I asked him if they could only have two bracelets and he told me that was just to start it off.  He said that the goal is that you always have two on your arm because people should be doing RAK for each other all of the time.

I love the idea.  Especially at the middle school tween ages.  I hope that the idea takes off and it starts something wonderful.  How inspiring it could be for these kids to know that by doing even a little thing for someone else can change their attitude  – because even the simplest thing could have a huge impact on someone else. 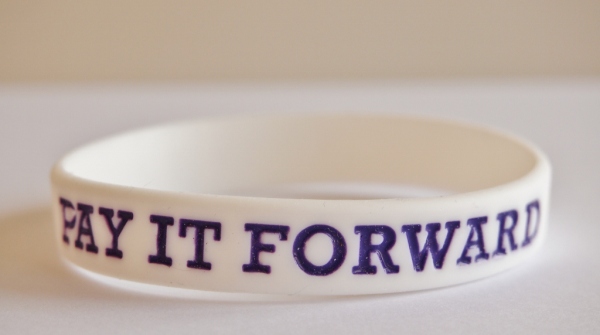